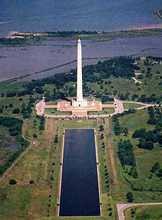 In April, 1836, two armies converged at Peggy McCormick’s ranch on the banks of the San Jacinto River.  In just 18 minutes, the Texian Army routed Santa Anna and the portion of the Mexican Army he commanded.  Texas was free!  Almost immediately, the area was revered as hallowed ground in the history of Texas.  Visitors clamored to see the place where Sam Houston and the Texians claimed victory in what has been described as one of the most consequential battles in world history…the Battle of San Jacinto.  Now a Texas State Historic Site, you can walk the ground Sam Houston walked and see the place where Texas independence was finally won.  Come explore the Texas Revolution at the San Jacinto Battleground in this interview with Texas Historical Commission personnel in charge of preserving some of the most sacred ground in Texas.